A short walk away from the popular but overcrowded Jemaa el Fnaa square lies, in an oasis of peace, the magical La Mamounia hotel. The entrance is hidden within lush green walls and solely given away by the large men from security dressed in black.  Once passed through the initial entrance, the award winning 5-star hotel feels like stepping into an ancient palace. With marble tiled floors that lead the way up to staff that awaits you in traditional robes. With the average price of rooms starting at $597 and going all the way up to $6.519 a night,  the best way to get a taste of the luxury on offer is by paying a visit to their day spa. There is, unfortunately, no getting in here without either one of the two reservations to show for. 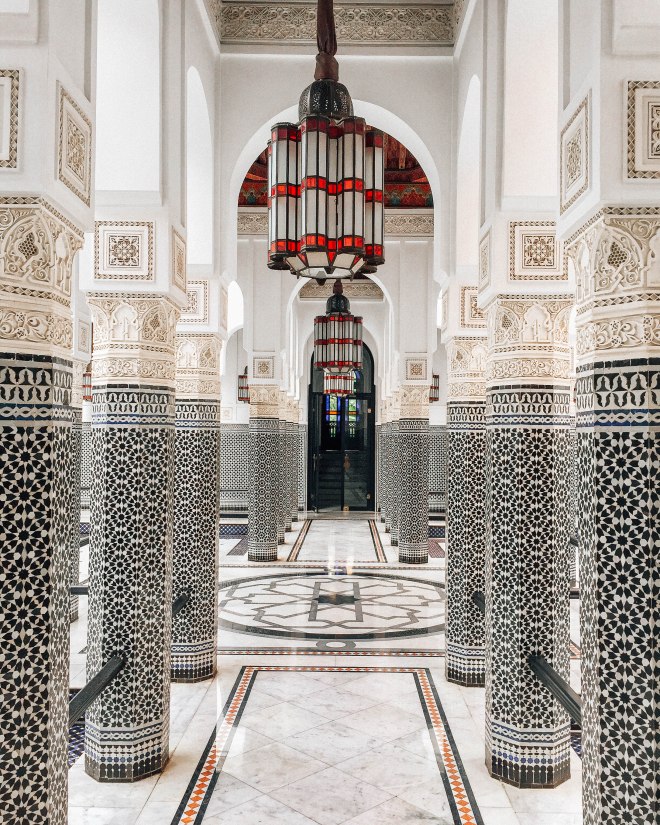 Right from the start, there are so many different impressions that its hard to decide where to look first. The overall lavish oriental atmosphere is enhanced by the deep tones of red and gold that are featured throughout the massive hotel lobby. Whilst on the other hand, the glimpses you catch of the outside areas of the hotel are infused with bright light and colorful tiles. In general, the sense of luxury that you feel when walking in here will almost makes you feel displaced. Expect to see international business men having heavy discussions whilst nested into extravagant red couches, hotel staff that is eager to anticipate on whatever service you might need or guests spending thousands of dollars in the high-end shops featured in the hotel; all whilst making your way through to the main entrance of the spa. 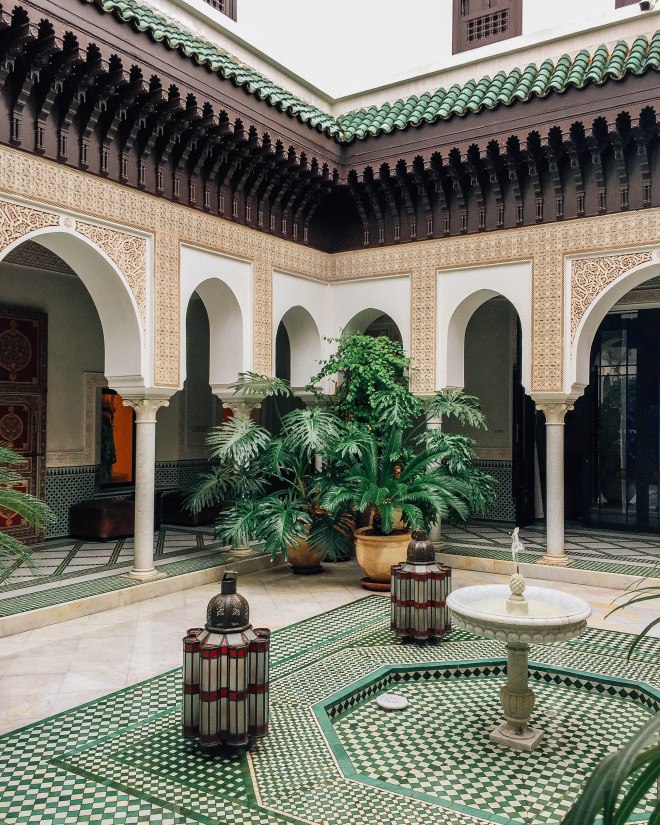 The day spa of La Mamounia has won many awards on its own and is as visually appealing as they come. The main pool is so captivating that is like something from a dream. But, frankly, so is every other aspect of the spa. Indulge yourself by going for the season pass – exact costs  can be found at end of the post- and get pampered with a 60-minute spa treatment, garden-side lunch and enjoy an afternoon of doing absolutely nothing. The spa treatments at the hotel draw inspiration of  Moroccan as well as Eastern culture, offering a variety of traditional and modern therapies. The spa pass furthermore, allows free access to several other leisure facilities. Such as the fitness pavillon, tennis courts and outdoor swimming pools 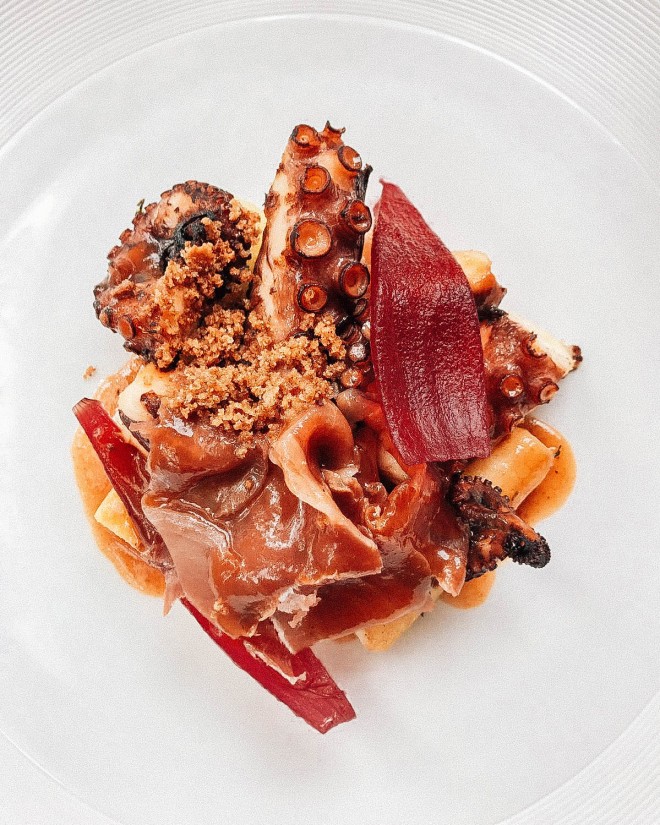 And then, there is the food. When opting for a season pass, a three-course lunch at the incredible Italian restaurant is complimentary. Each and every dish we tried was sublime, as were the several staff members waiting the table. But, do note that this menu excludes any drinks you might have. The wine list, as to be expected, matches the rest of the prices of the hotel. However, there is a really decently priced Moroccan wine on there which we were hesitant to try at first, but later turned out to be perfect. The hotel features two more signature restaurants. An authentic Moroccan one and one that offers a French cuisine, all offer an intimate setting and a menu that stays true to their origins. 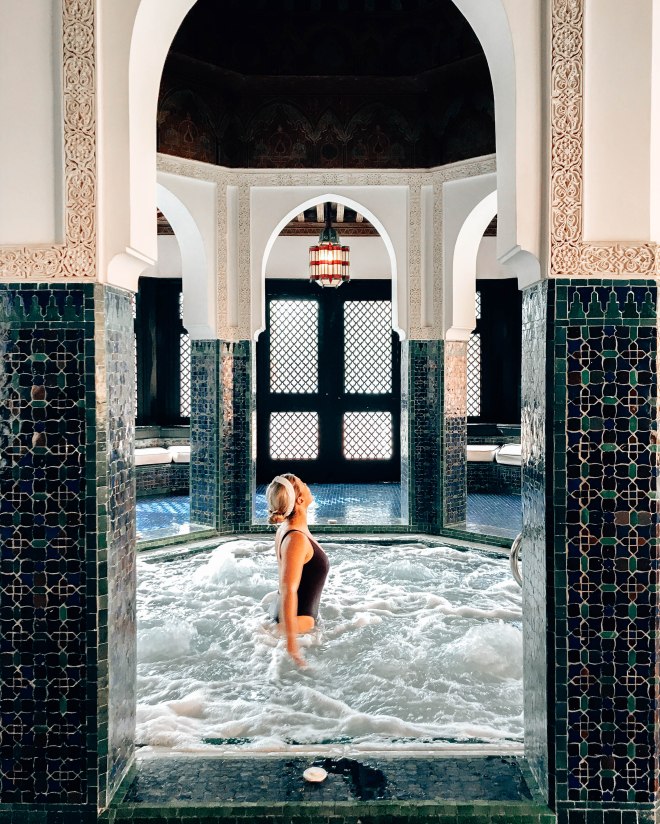 What is a visit to the La Mamounia day spa going to cost you?

The Italian restaurant, as one would expect, is high-end and priced as such. This is what, even though the drinks might be excluded from the deal, makes the season pass an exceptionally good deal. The season pass is valid for the entire day and includes a 60-minute massage or hamam treatment, a lunch at the Italian or French restaurant (depending on opening days) and will cost you $163 (€132). As we, of course, couldn’t pass up on some good wine, our drinks brought the total up with another $73 (€59). Which combined, led up to a total price of $399 (€323) for a single day at the La Mamounia spa for two persons.

You can also opt for a day pass, which is valid for a treatment before 15:00 daily, and considerably cheaper: priced a little over $65 (€52). This will also allow you entry to the rest of the spa facilities for the day. Keep in mind that both passes are subject to availability, reservations are always a good idea.

But as mentioned before, with the superb lunch, massage and just an entire day of relaxation in one of the prettiest surroundings imaginable, if you can spare it; go for the season pass.

How to get to La Mamounia?

The hotel is very conveniently located near the main entrance of the old city centre of Marrakech. Or if you’re already staying within the medina, the hotel can easily be reached by foot. The same goes if you want to explore other popular things to do in and around the medina after your hotel visit, such as a visit to the bubbling souk or the impressive Ben Youssef Madrasa. The doorman will also be happy to pull over a taxi for you, however keep in mind that coming from this hotel the taxi driver will think you have some serious cash. And therefore most likely aim to charge the highest amount possible.
For more information on La Mamounia and their spa facilities visit www.mamounia.com/en/
Please note that an elegant dress code is required in all public areas. 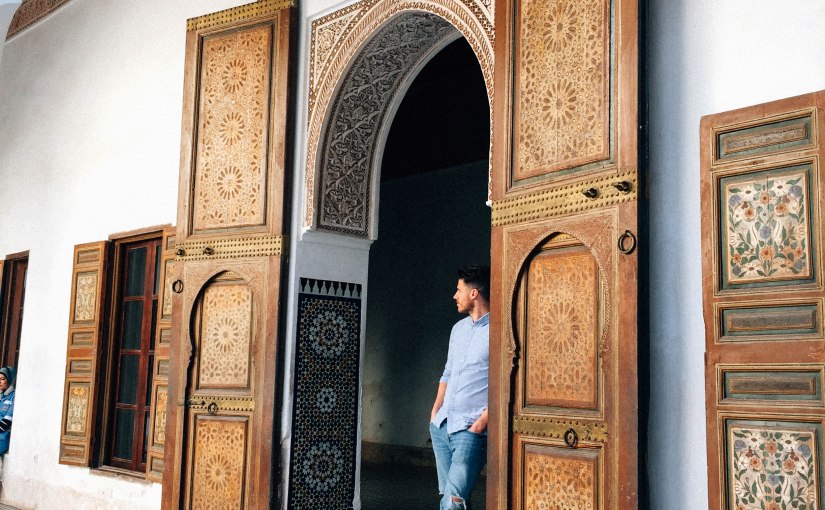 Whether you’re craving the sun, want to get acquainted with foreign culture or wish to explore historic monuments; Marrakesh lends itself perfectly for all city trip lovers. But, as many are aware, those short vacations can become quite costly real fast. Therefore, finding one of a kind things to do, that do not involve reaching deep in to the wallet, are a precious find.

Just a few streets away of the Souk lies the impressive Ben Youssef Madrasa. This monumental building formerly functioned as the country’s largest Islamic school, but is now by many perceived as cultural heritage. The abandonment living quarters, which used to house the students, offer phenomenal views where visitors can glare at the fine architectural details that have been crafted in to the building.  Luckily, you’ll most likely won’t explore the property alone, as creepy feelings sneak up on you fast whilst standing in these small dark chambers. The entrance fee will cost you  MAD 20, equal to $2.18. 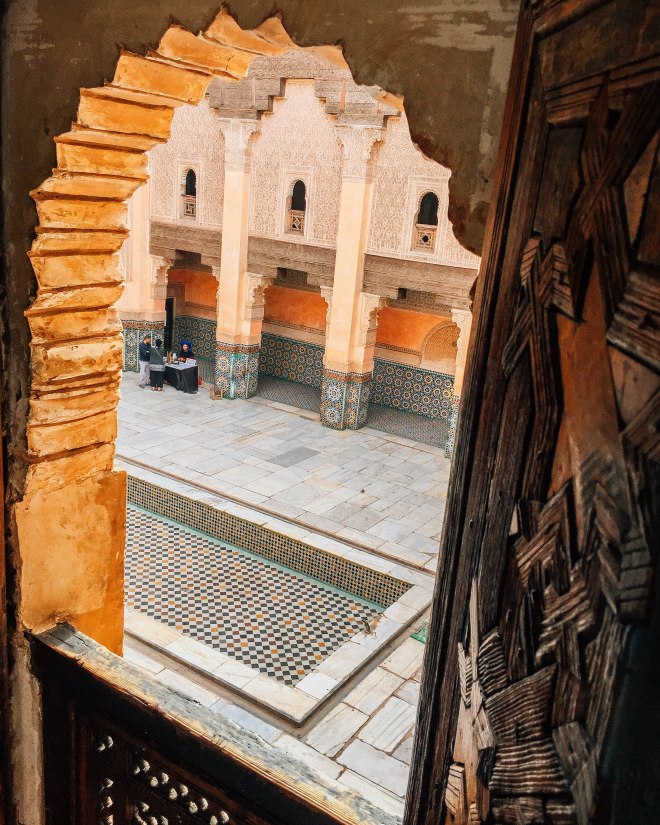 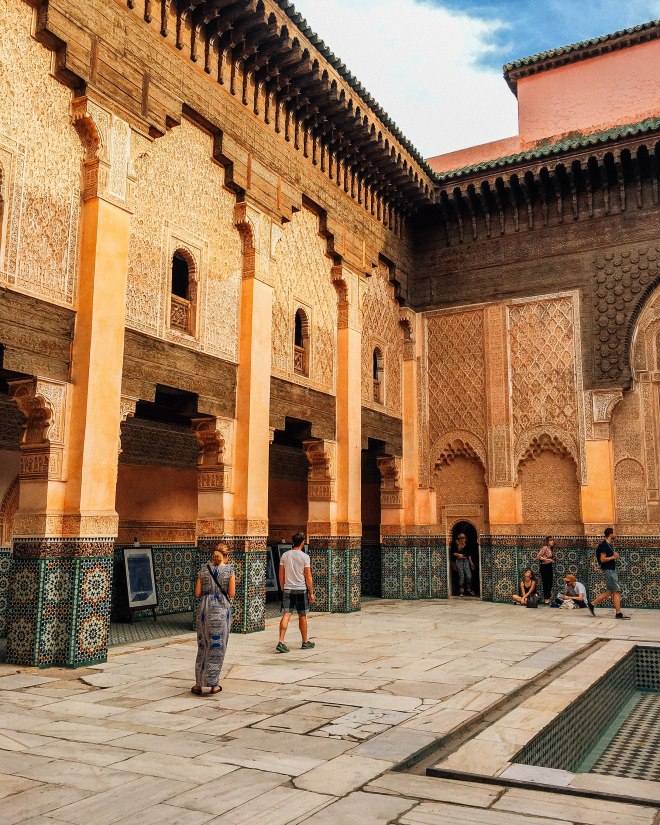 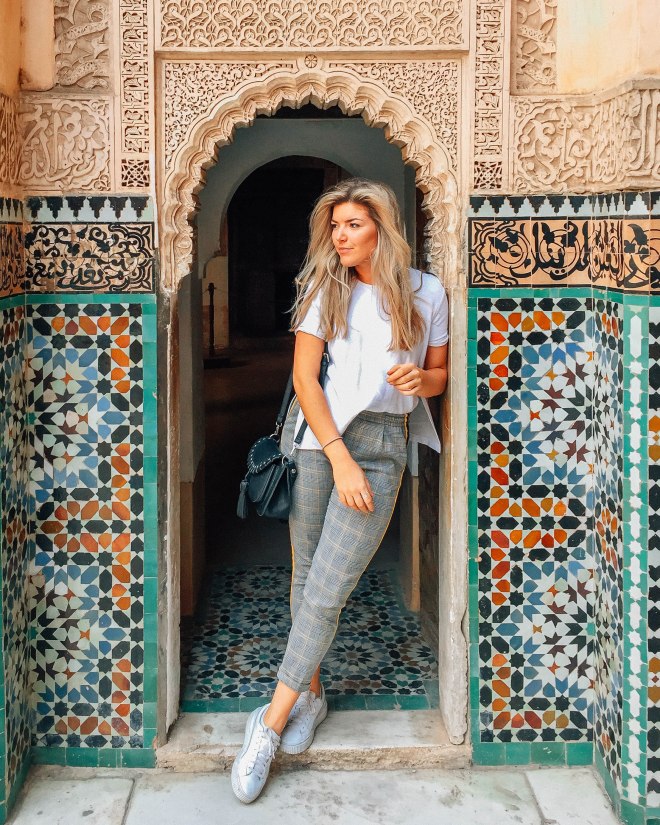 We’ve yet to come across a palace that doesn’t excite us. The architectural brilliance that  goes in to building these royal residences have some sort of ancient glory over them. And, as they age, their beauty remains. Which is literally what the palace of Bahia stands for – palace of the beautiful. The palace, covered in colorful tiles and marble carvings, was build in the nineteenth century and is located on the south-east of the old city centre. The entrance fee of the Bahia Palace is very gentle and comes down to €1 – $1.24. 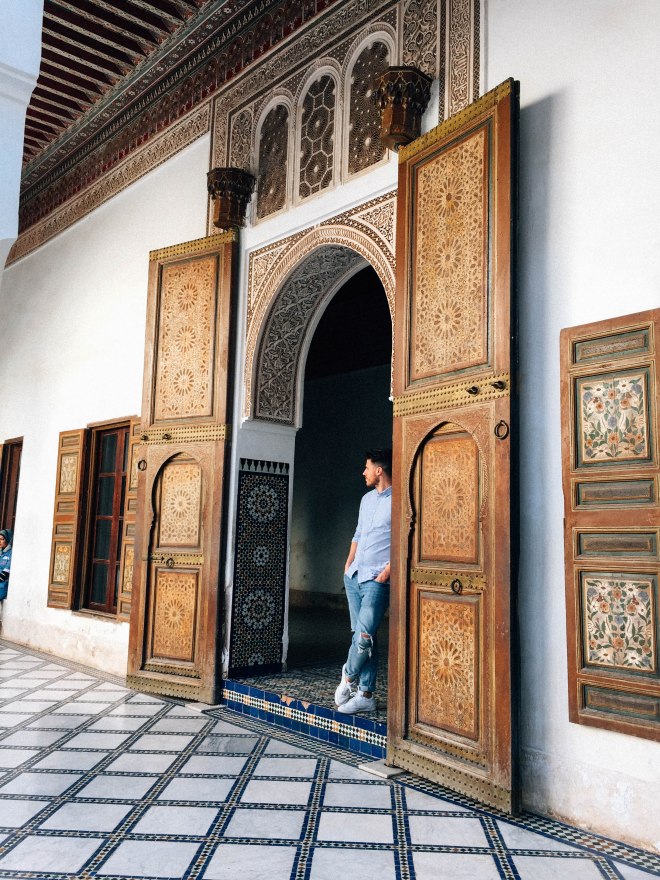 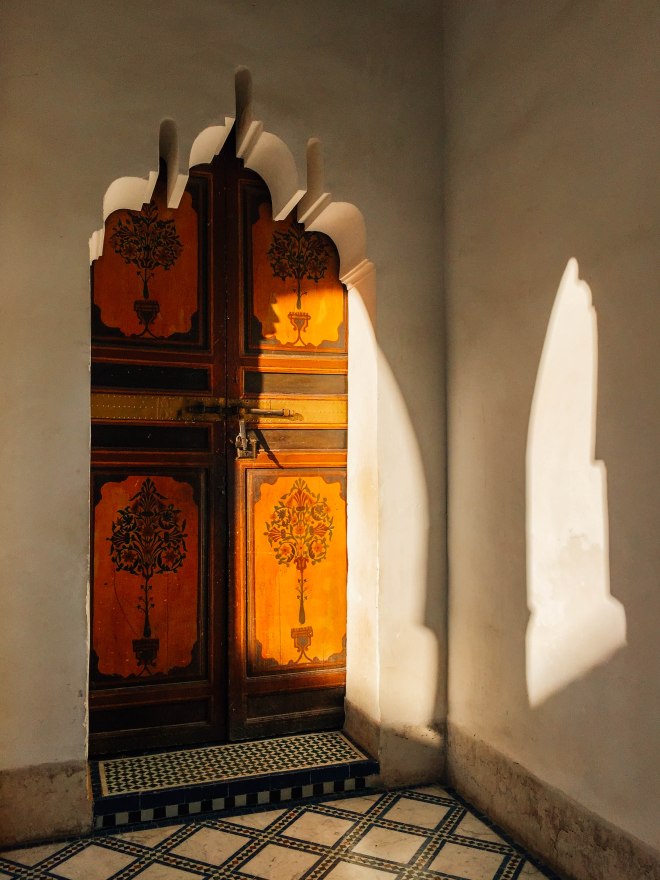 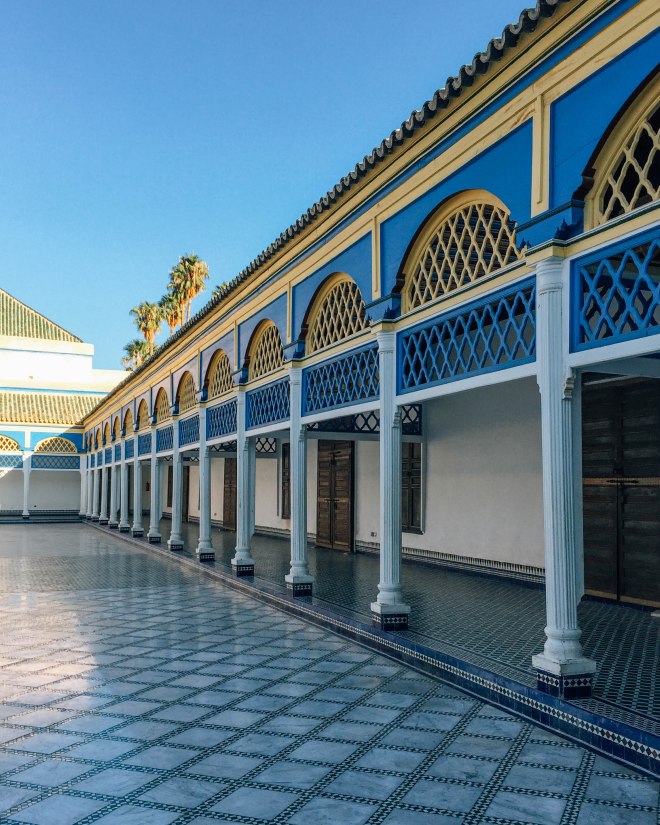 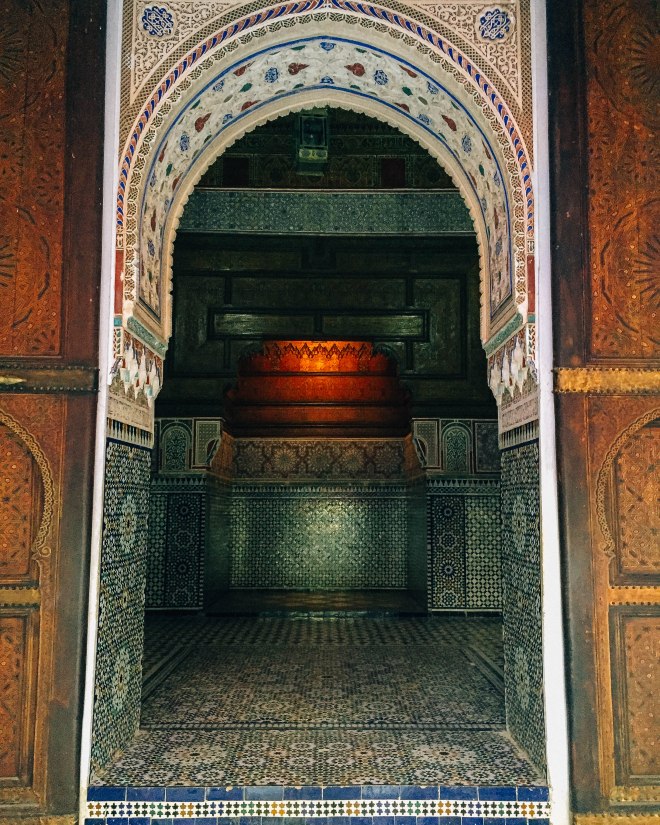 For more information on the Bahia palace and opening hours, visit www.palais-bahia.com/

Lush greens and bright blues. The Majorelle garden is a small botanical garden, located some what outside of the Medina, that combines artistry with gardening. The garden is also commonly known as the YSL garden, as designer Yves-Saint-Laurent purchased it together with companion Pierre Bergé in the 1980’s, to restore and maintain the land. The place is, nowadays, as colorful as it is popular. If you’re keen on a visit without standing in line for hours, try to go early on the day and especially avoid weekend days. Another way to go around the line is to buy a combo ticket, which includes entrance to both the museum as well as the garden and can be purchased at the museum entrance, where it is considerably less crowded. This does raise the price however to 100 MAD, whilst regular entrance to the enchanting Majorelle Garden will cost you 70 MAD, equal to €6.2 – $7.6.

For more information on the Majorelle Garden visit www.jardinmajorelle.com

Still need a place to stay in Marrakesh? Hit this link for our accommodation tips. 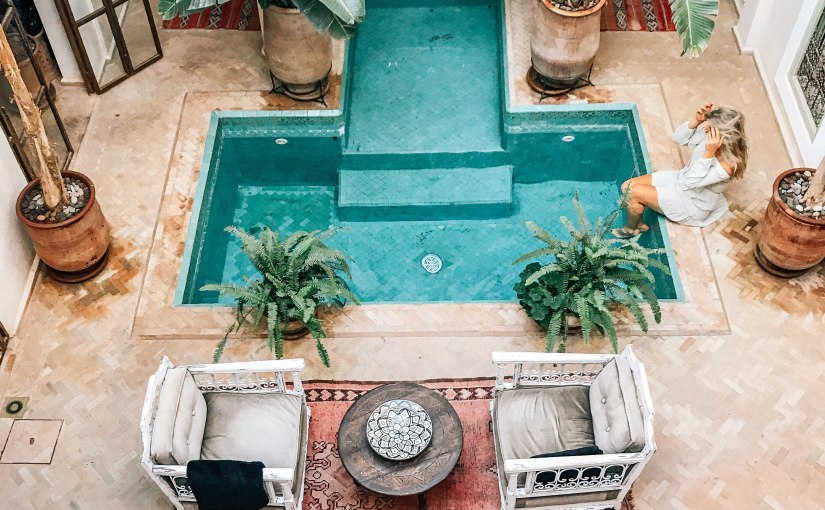 Well, hotel, hotel… actually this accommodation is classified as a riad. A term originating from the old days, where a riad was commonly known as a traditional Moroccan house within the centre of it all a garden or courtyard. All within the comfort of the old city walls – therefore, within the medina (old city centre of Marrakesh) you’ll find lots of these Moroccan houses of wonder. Whilst many parts of the old city feel long over do for a renovation, most riads are like stepping in to another world. A world straight from your 1001 fairytale that is. And that especially goes for Riad Palacio De Las Especias.

This riad is interior perfection for us, containing future home goal after future home goal. Plants everywhere, hints of bright colors and the turquoise pool. The rooms are spacious, with rose petals on the bed upon arrival- super cheesy but we can’t help but to love the extra effort our hosts made for us. 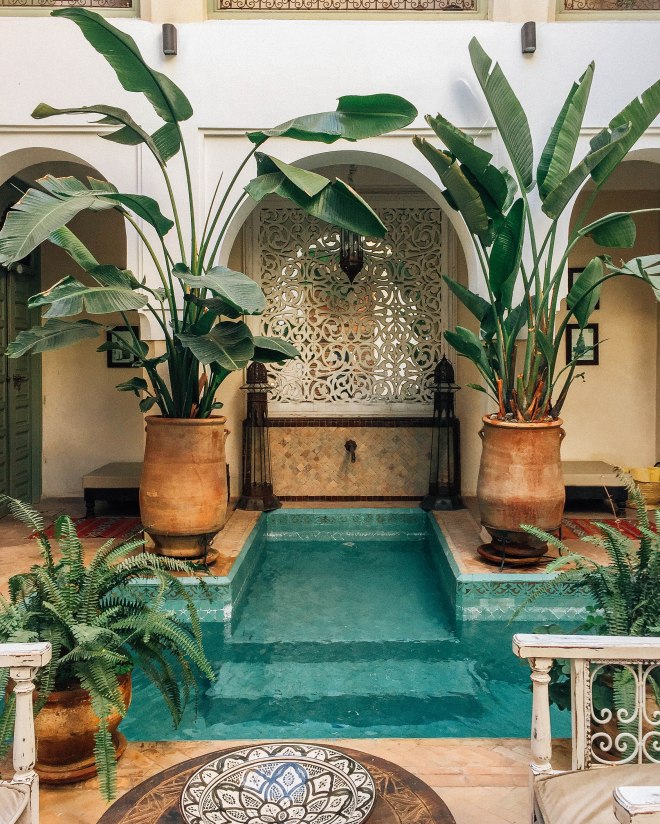 But if that doesn’t sell you. How about the diverse breakfast on offer. Which they will set up on your own private table throughout your stay. Diversifying day by day and just enough to let even the anti-morning persons amongst us leave the breakfast table smiling. 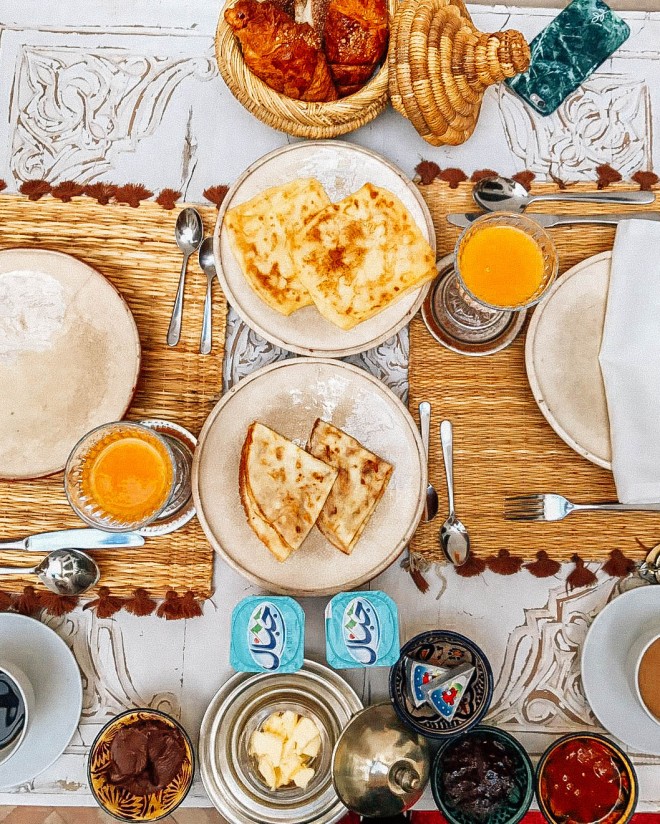 Guests of the riad also have acces to the roof top terrace. If the temperature is right, you can even request even they set up the yummy breakfast featured above under the blue morning sky. Also a great spot to hang and recover from your day of exploring all that Marrakech has on offer. 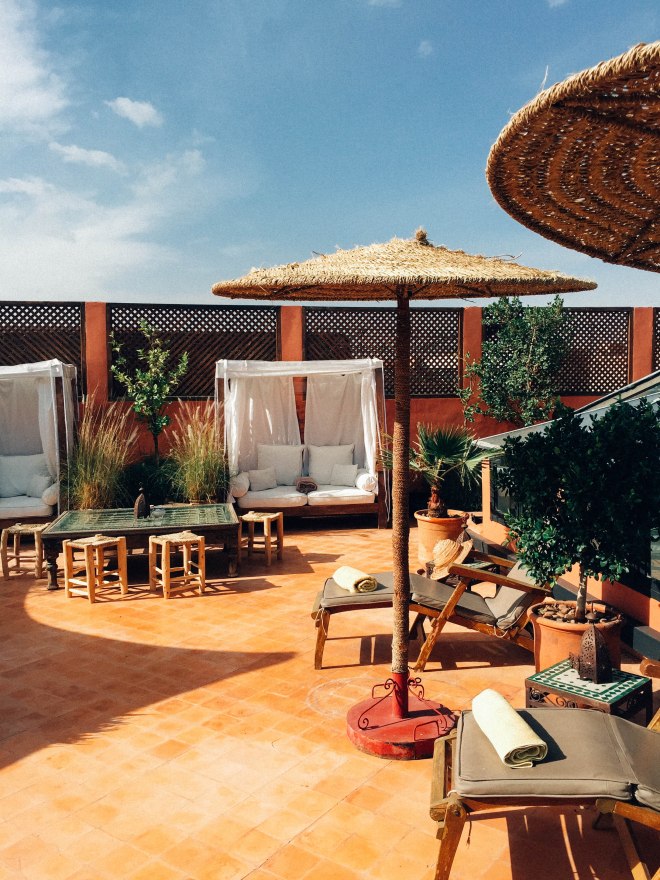 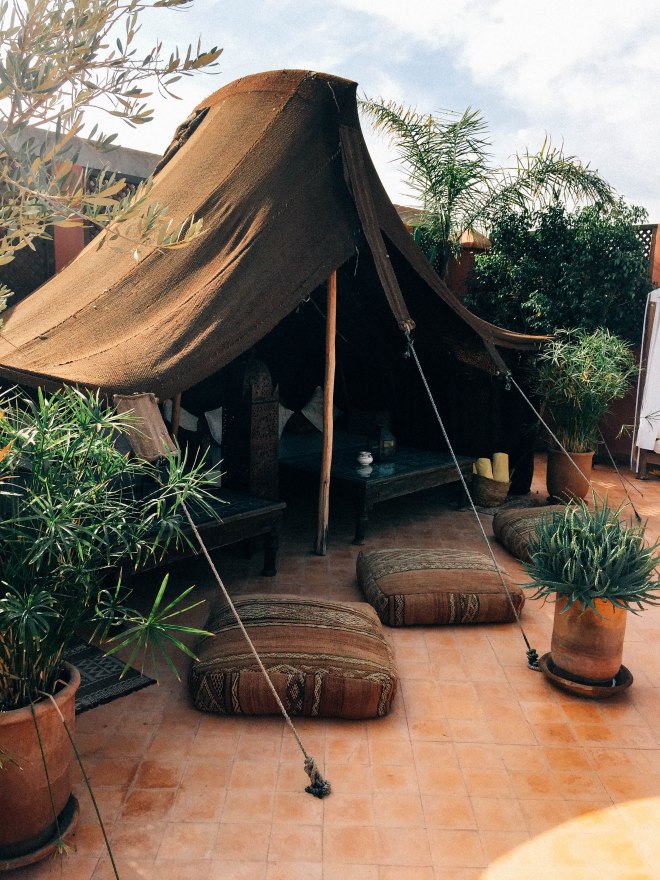 Want to wake up in Riad Palacio De Las Especias? Check out the the current prices for your desired date and time here. 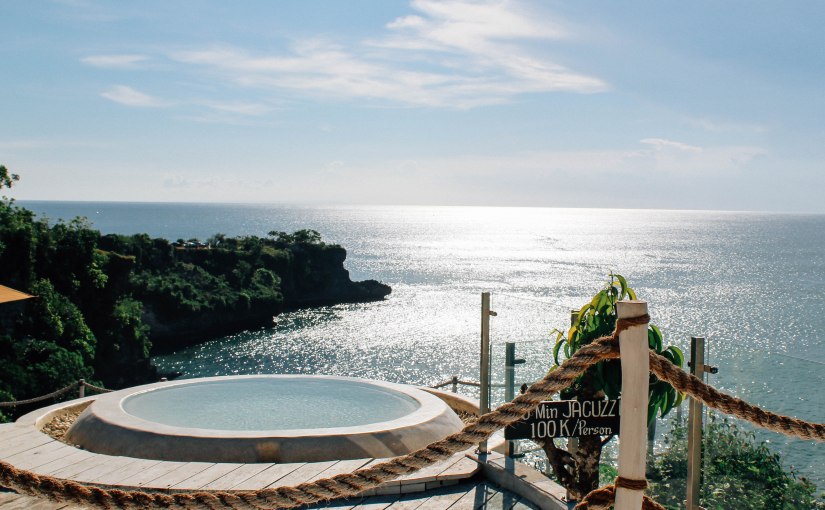 Truthfully, you don’t even have to be a bubble bath fanatic to appreciate the following three beauties, that each have views to never – ever- forget. Without spoiling to much, have a look at the following absolute stunners and find out how much it is going to cost you to take a dip.